WARNING:  These comments are entirely meant to be constructive.  They are not indictments.  They are not comments on the hearts of advocates, the hard work of advocates or individual abilities.  Comments are just meant to question whether or not collectively we are effective advocates.  This whole post is meant to challenge us to think.  The data is from a single snapshot in time and may contain some errors.  This is not based on a methodical secondary data analysis.  (By the way, I would love to do that someday…establish a benchmark and measure progress with actual statistical analysis.)  So don’t take it personally.  As long as people are dying, as long as the gap between those waiting and available organs is growing, then we have to be willing to look hard at our collective effectiveness.  One last disclaimer – #iwork4dell.

hmmm, who am I talking with?

Whenever you post something on a blog, or send a tweet, or broadcast yourself on YouTube, do you ever feel like it’s just going out into the deep, dark ethersphere and you are talking to yourself?  Well, you just might be.  As I’m learning more and more about how to be effective in social media, I understand a few of the Gibbs type rules. (You are a fan of NCIS, aren’t you?)

Rule #1.  It’s about relationships.  Are we just pushing messages out there?  Or are we dialoguing and listening?  Are we evolving understanding?  In Twitter, I have created a public list of 181 accounts that advocate for organ donation (feel free to subscribe to it!)

Rule #2.  It’s about trust.  Persuading folks to buy something, to believe in something, to take action is much more likely to happen when it is a peer talking to them.  90% of people (consumers…how about consumers of information) trust peers more than they trust the experts.

So let’s take a look at how these 181 accounts graph out. 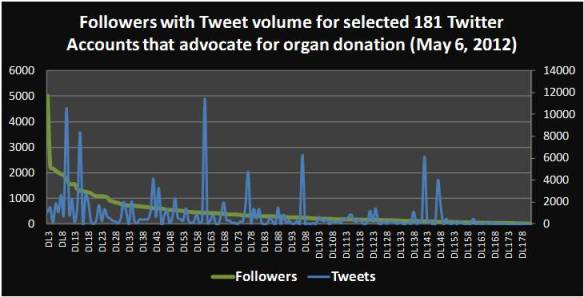 You can see the highly skewed distribution of followers and the erratic tweet volume.  See those two high peaks on the right?  The ones with high volume of tweets and low numbers of followers?  One is a person who needs a kidney transplant and the other is a transplant recipient.  See the highest peak for tweet volume?  With better than average followers, this is a person who needs a liver transplant.  The two accounts on the far left with both high tweet and follower volume?  One is a transplant recipient and one is a PR professional.  (By the way, I excluded the top two accounts from this chart because their volumes are so much drastically higher than everyone else, the chart becomes unreadable.)

Rule #3.  It’s about creating community (but not just for us).  Who are we talking to?  Who is the target audience?  People who already believe in organ donation?  People who are already registered?  Or people who have questions?  People who still believe myths?  People who don’t feel an urgent call to action to register even though they are in favor of donating?  Earned social media is when OTHERS do the advocating for us.  I guess you can say folks who are not in the “organ donation establishment” could be considered earned media.  But could we go so far as to get those who believe in myths and who “convert” to advocate for us?

Let’s look at four of the accounts with similar Klout scores.  What % of each accounts followers are shared with the other three?  One of these accounts is my own twitter handle – @wendyjean56.

So this tells me that when me and DL139 tweeted this week about Facebook’s INCREDIBLE action on behalf of the more than 114,000 PEOPLE waiting for transplant – well, we were talking to the people who already know about it.  DL91 and DL75 are doing better but still almost one-third to one-half of the time our “reach” was mostly just us.

In the future….thoughts on hashtags, re-tweets and amplification.